Jianshui is without any doubt the most beautiful city in South Yunnan in the Honghe Prefecture, 210 kilometers away from Kunming.

At first sight, Jianshui may look similar to any other Chinese town. Nothing is less true. Jianshui holds a village atmosphere, with old streets and traditional houses such as around the Chaoyang Gateway Arch in Jianshui Old Quarter. Besides, climatic conditions are pleasant; neither hot in summer nor too cold in winter.
Jianshui is situated at a height of 2,285 meters and is surrounded by mountains. Jianshui got established in the Tang Dynasty (618-907 AD) and is one of the earliest developed cities in south Yunnan that enjoys the fame of being an ancient cultural city and an important gateway. Folks, among which were the Yi and the Hani, traveled through Jianshui from north to south and the other way around.
Yunnan was under control of the State Yi Nanzhao - based in Dali - since the eighth century. Around the year 810 Nanzhao State built the city Jianshui, then called Huili. In the Yuan Dynasty, the city got renamed to Lin'an, a garrison town and already walled. In the Qing Dynasty (1644-1911) its name was changed to Jianshui. For more than seven centuries it remained a strategic town in the south of Yunnan. The importance of the city is visualized by its constructions such as the Confucius Temple.
Since 1988 the city can be visited by foreigners. The city is mainly inhabited by Han people, but around the city, you will find many minorities such as Yi, Hui, Hani, and Dai. 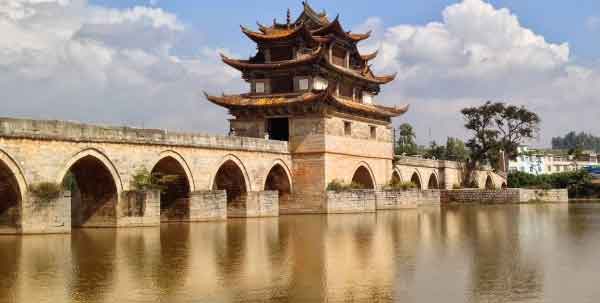 15 constructions have remained intact for more than 12 centuries in Jianshui Ancient Town. With more than 100 ancient temples, 50 ancient bridges and 56 state-protection cultural relics, Jianshui enjoys the fame 'the Museum of Ancient Constructions'. Besides, Jianshui is devoted to developing local handicrafts, among which Jianshui earthenware. It is one of the four celebrated potteries in China.

Fish ponds, fine gardens, 42 courtyards, and astonishing woodcarvings make The Zhu Family House - built in 1611 during the Qing dynasty - most famous. The house contains an area of 20,000 square meters. Many movies were once filmed here. At the end of the nineteenth century, the family was very rich. Their activities were concentrated on trade in tin and opium. Besides, they were local administrators.

Built in 1389 in the center of the city, the Chaoyang Gateway Arch stands as a symbol of this ancient military town. The tower was part of the defensive constructions. It got its current form in 1389 and thus is older than The Gate of Heavenly Peace in Beijing. You will find a teahouse and a small exhibition within the tower. The square behind the tower is a social meeting area. Old men play music, many people sing and dance, and cards are played. If you walk from the tower through Jinlinan Lu street into the Old Town, you will encounter a lot of old houses and many traditional shops and local restaurants, including 'Noodles over the bridge'.

The Chongwen Pagoda was built in the thirteenth century (Yuan Dynasty) and is also called Wenchang or Wenfeng Pagoda. The Pagoda counts 13 levels. Crowned by a square pavilion on top, it is another example seldom seen among Yuan Dynasty pagodas. In the neighbourhood, you will find old wells and another temple, the Wenbi Pagoda, built in 1828.

The Confucius Temple is the biggest temple in Yunnan and the second largest Confucius Temple in China. It is located near the North Gate. The Tempel was originally built in 1285. The Tempel comprises an area of 7,5 hectares and counts 14 halls, that are well maintained. For centuries the temple was used as a school and a place where exams were done in Confucian classics. Those who passed these exams often obtained high administrative posts. Within the area of the temple, you will find the most prestigious high school of Jianshui. Thus, the tradition continues.

The famous marshal Zhu De lived from 1912 till 1915 in Jianshui. Then he led 200 men, later the victorious Red Army. The 200 square meter residence, situated at 19 Hongjin Road, was the private property of Zeng Shizhong, a schoolmate of Zhu De. It is a courtyard house with three main and six wing rooms. During his stay in Jianshui, Zhu De lived in the three wing rooms on the east.

Family Zhang from Zhejiang founded TuanShan centuries ago. And still, Zhang is the majority in the village. The Zhang family became rich because of the exploitation of tin. They constructed beautiful houses that are still worth a visit. They are traditional courtyard houses, often with decorative carvings. Part of the family left centuries ago to Dali. Even in this village, the Cultural Revolution (1966-76) left its marks. You still can see Mao slogans and portraits on the walls. Since 1995 a new wind is blowing through the village. In that year, the village got acknowledged as cultural heritage and the courthouses were renovated. In 2005 TuanShan was appointed as one of the hundred most valuable architectural heritage of the world. The old Buddhist temple got renovated and is in use again since 2003.

The Double Dragon Bridge is located 5 kilometers west of Jianshui, at the confluence of the Lushui River and the Tacun River. This ancient bridge was first built during the reign of Emperor Qianlong (1711-1799). It got rebuilt when the Emperor Guangxu (1871-1908) was ruling. He added 14 arches and made it the 17-Arch Double Dragon Bridge. The bridge stretches 153 meters, is 3 meters wide and paved with black marble. Standing on the bridge you witness beautiful views; endless green fields and majestic blue mountains reflecting in the clear water.

Jianshui pottery - also known as Southern Yunnan red jade - has a history of several centuries. Today, it is considered to be among the four famous types of Chinese pottery and represents the traditional folk art of Jianshui County. Producing artistic pottery takes a combination of high-quality materials and skilled artists. Jianshui pottery makes use of rich and unique local deposits of red, yellow, purple, cyan, and white clay; thus five colors. The pottery is made by following the five steps of painting, carving, scratching, burning and polishing. Many kinds of potteries such as cooking utensils, jars, stationery, tea set, flower pot, and decorations on the desks are made. And, the original version of the famous Yunnan dish, 'Boiled Chicken with Panax Notoginseng', is only cooked in Jianshui pottery. The pieces are described as having ' a body like iron', 'a color as copper', 'reflect like a mirror', and 'sound like a chime'. 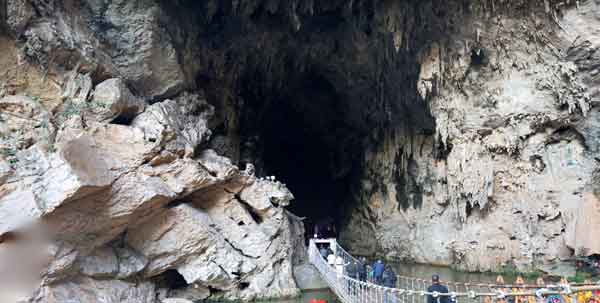 Apart from cultural attractions, the surroundings are also delightful. The three state nature reserves, namely the Daweishan Mountain, the Fenshuiling Mountain, and the Huanglianshan Mountain are rich in natural resources.

The swallow cave is located 30 kilometers to the east of Jianshui. It consists of a dry cave, a water cave and a 30,000 square meters natural forest. In each spring and summer, thousands of swallows migrate from Malaysia to the cave in Jiunshui to mate. The local environment is an excellent dwelling for swallows. Sharp cliffs give shelter from their natural enemies, while bushes and grasslands outside the cave produce insects to feed on.

The mild climate with plenty of rainfall, an average annual temperature between 16 and 20 ºC, and annual sunshine of 2000 hours, makes Yunnan suitable to grow all kinds of crops.

Rice and corn are alternated with cash crops such as tobacco, sugar-cane, tea, peanut, and rape-seed. Besides, forest crops like rubber, palm fiber, herbs, and sisal are produced. Fruits include lychees, oranges, pineapples, grapes, pomegranates, and bananas. Honghe Prefecture has become a main fruit producer for Yunnan Province.

Honghe Prefecture in which Jianshui is situated is nicknamed as 'The natural kingdom of wildlife'. Whether or not it is a bit exaggerated, there are as many as 116 kinds of animals, among which are the Malaysian bear, the Indian tiger, the gibbon, the sloth monkey, the leopard, the black crane, and the golden eagle. There are more than 7,000 kinds of plants, 774 vertebrates and 911 Chinese herbal medicines. Four rivers cross the land of Honghe: the Honghe River, the Tengtiaojiang River, the Lixianjiang River, and the Nanpanjiang River.