Located in the south of Yunnan Province, Jinghong is the capital of Xishuangbanna Dai Autonomous Prefecture and the historic capital of the former Tai kingdom of Sipsongpanna.

A total of 13 nationalities live together, among which are Dai, Hani, Jinuo, Bulang, Hui, and Yao. The population of ethnic minorities forms almost 70% of the total population.
Hani people mainly live in the mountainous and semi-mountainous areas such as Menhai, Menglong and Mengla counties. The Jino you find in particular in Jino and Mengwang. Blang people are the aborigines of Yunnan Province and mainly live in Bulangshan and Xiding, Mengman, and Daluo. Hui people are concentrated in Menghai and Mengzhe.
Additionally, there are many cultural and scientific institutes in Jinghong, including the Yunnan Institute of Tropical Craps, the Yunnan National Laboratory primate Center of China and the largest butterfly farms of China. 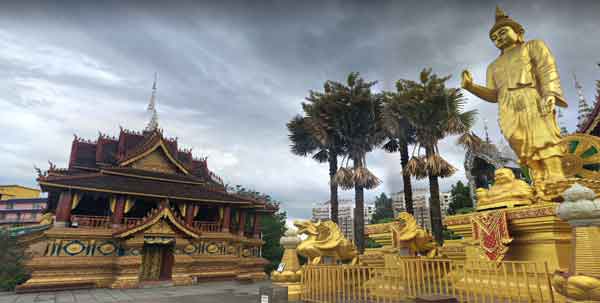 Every night there is a big night market in Xishuangbanna Park just on the right of the New Bridge. You can buy almost anything here and there are endless street food stalls.

Hynayana Buddhism and its temples

Hynayana Buddhism mainly spreads in Xishuangbanna, De'hong, Simao, Lincang, and Baoshan prefectures. The Dai, Bulang, De'ang, Achang people and some Was are the main followers. Especially, Dai boys, when reaching a certain age, are required to spend a period of monastic life in the temples as novices from seven days to several months. Significant pagodas and temples for Hynayana are Manfeilong Pagodas in Jinghong, Jingzhen Octagonal Pagoda in Menghai, Guangyun Myanmar Temple in Guangyun, Copper Buddha Hall of Yuangtong Temple in Kunming, etc.

The well known White Stupas near the village Manfeilong, 70 kilometers from Jinghong, are also known as White Pagoda and Bamboo Shoot Pagoda. It was built in the year 1024.
The Manfeilong Pagoda consists of nine stupas. Seen from the distance, they look very like bamboo shoots. The stupas are made of bricks. The central stupa - 16.29 meters high - is surrounded by eight smaller stupas with a height of each 9.1 meters. The bells that hang at the top of the pagodas make a tinkling sound when the wind blows.
Just 3.5 kilometers south of the White Pagoda you will find the Black Pagoda. This pagoda is over 18 meters high. As its name implies, the pagoda was originally black but following several refurbishments, it is now a silvery white.

The Octagonal Pavilion is situated on a hill in the village Jingzhen, almost 90 kilometers from Jinghong. It represents the superb craftsmanship of the Dai Minority in both construction and decoration. The half-timbered pavilion was built in 1707 and was originally used as a Buddhist meeting chamber and is over 20 meters high. All decorations in and on this pavilion are too much to mention. The only option you have is to check it out yourself.
The pavilion got listed onto the list of 'major historic and cultural sites under state protection in 1988.

If one is in the town during the Thai (Dai in that area) new year, you will meet a massive celebration with Dragon boat racing and a massive city-wide water fight on the final day of celebration.

Ganlanba (Menghan, that means Olive Plain) is a small town on the Mekong River. It offers a few temples, the Mekong itself and a beautiful daily market. The local Dai people sell vegetables, fishes, fruits and everything else they produce.

The market in Menghai might be one of the most impressive markets you will ever visit, a vivid reflection of local peoples lives, in terms of variety, color, and the exotic atmosphere.

On the border with Burma, you will find the very small city Xiding. However, its colorful market will astonish you (every Thursday); its a very authentic market. It's both a shopping and a social event for all nearby villagers. On your way to the village (starting in Jinghong) you will encounter sugar cane and tea plantations, and Bulang and Aini villages. At the market itself you will meet various minorities, among which are the Aini, the Bulang, the Lahu, the Dai, the Hani, and some others might be present as well. 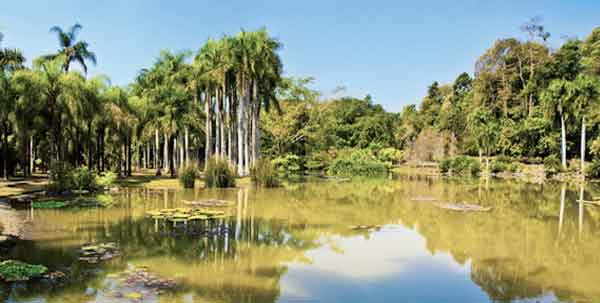 China's largest Botanical Garden - 900 hectares - is located almost 100 kilometers from Jinghong; Xishuangbanna Tropical Botanical Garden of the Chinese Academy of Sciences. It contains nearly ten thousand different species of tropical plants. Located on the picturesque isle in the Luosuo River, the garden was established in 1959 under the leadership of Chinese famous botanist Prof. Cai Xitao. Some rare exotic and endangered plant species here that you can see here are for example 'Dancing Grass', that responds to sound and the 'Mystery Fruit', that can turn sour to sweet and sweet to sour.

It's more than just elephants! About 50 kilometers north of Jinghong you encounter the Wild Elephant Valley, a typical tropical rain forest (369 hectares). Besides the elephants, you can also spot wild buffalo, green peafowls, rhesus monkeys and other animals and birds, many of which are rarely seen outside a zoo. Furthermore, you can also spot birds and butterflies from the forest's canopy. From a few meters above the ground, you don't disturb the elephants and you have a good view. There are around 300 elephants left in this area. This protected site was created in 1996. The elephant school at this site features daily three shows in which the animals display their skills.

The Mekong river - also known as Lancang Jiang (turbulent river) in China - is one of the world's most amazing rivers. Originating in Tibet, the river tumbles down the Himalayas into Southeast Asia, via the borders of Laos, Burma, and Thailand into Cambodia. It finally reaches the Mekong Delta in Vietnam, where it empties into the South China Sea. The difficulty of navigating the river has meant that it has divided, rather than united, the people who live near it. The Mekong is the longest river in Southeast Asia, the 10th longest in the world and the 7th longest in Asia. With about half of its length in China, it's estimated length is 4,909 kilometers, it provides food and water for 60 million people and discharges 475 billion cubic meters of water each year into the South China Sea. The Mekong basin is one of the richest areas of biodiversity in the world. Only the Amazon boasts a higher level of biodiversity. More than 80 percent of the people that live in the Mekong River basis rely on the river for agriculture or fishing.

Parks in and around Jinghong

A pleasant 'park' with an artificial lake and a fountain. If it's not raining, during the evening check the corner just outside the park on the roundabout, locals gather and dance on the open for many hours.

Another pleasant park that is divided into eight parts, the Manting Park. It's eight parts are the main entrance, the National Cultural Plaza, the Tropical Orchid Garden, the Peacock Garden, the Life-leaving Lake, the Buddhism Cultural Quarter, the Planting Memorial Quarter and the Dai Cultural Teahouse. There are performances of singing, dancing, and fire. Check at the counter at the entrance for times and fees. With a history of more than 1,300 years, Manting Park is the oldest park in Jinghong City. In medieval times, it was the park where feudal leaders went to relax and enjoy themselves. The traditional culture of Dai is visible in the park. For example, there is a temple called Jiebajie. It is the most important place for Buddhists in Xishuangbanna to worship Buddha.

The town is on the Nancang River, a wide tributary of the Mekong. There is excellent walking along the riverfront.

Ancient tea plantations with a traditional taste and worked on by local minority people for generations. The area is primarily inhabited by the Bulang, Hani and Dai ethnic groups. No matter how long you travel in Yunnan, there's always a surprise waiting for you. Well, the ancient tea plantations might be one of these surprises. Besides drinking tea, you might want to try suancha, a fermented tea that is eaten rather than drunk.