Kunming, the capital of Yunnan, is centrally situated in the province. It is the political, economic, and cultural center of Yunnan.

Kunming city got nicknamed 'City of Eternal Spring', because of its climate, flowers that bloom year round, and its greenery and its natural surroundings. Kunming often is the port of entry to other destinations in Yunnan. With a history of more than 2,400 years, Kunming was the gateway to the celebrated Silk Road that facilitated trade with Tibet, Sichuan, Myanmar (formerly called Burma), and India. 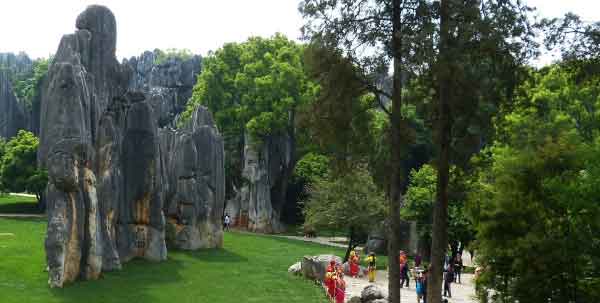 The forest reserve to the west of Kunming consists of the Huating, Taihua and Luohan Mountains, crossed by brooks and streams. The reserve ranges for more than 40 kilometers at an altitude of 2,500 meters. Ancient trees, many birds and countless fragrant flowers complete the scenery. It deserves the nickname 'Sleeping Beauty'. The spectacular complex of grottoes, pavilions, stone ladders, steps, and twisting tunnels that is called Dragon Gate was hollowed out of the rock - beginning in 1781 - by a Daoist monk named Wu Laiqing. The work was continued after his death by local villagers and pious gentlemen, and completed in 1853. On March 3, every lunar year, hundreds of Kunming people crowd up to the hills for celebrating 'Spring Touring'.

The Stone Forest is a notable set of karst formations located in Shilin Yi Autonomous County, approximately 100 kilometers from the provincial capital Kunming. The tall rocks seem to emanate from the ground in the manner of stalagmites, with many looking like petrified trees thereby creating the illusion of a forest made of stone. Since 2007, two parts of the site, the Naigu Stone Forest and Suogeyi Village, have been UNESCO World Heritage sites as part of the South China Karst. These formations, caused by the dissolution of limestone, are believed to be over 270 million years old. According to a legend, the forest is the birthplace of Ashima, a beautiful girl of the Yi people. After falling in love she was forbidden to marry her chosen suitor and instead turned into a stone in the forest that still bears her name.

The Dianchi Lake is about 2 kilometers southwest of Kunming City. Its natural banks are formed by mountains on all four sides. More than twenty rivers nurture the lake. Dianchi Lake is about 300 square kilometers. It is the largest freshwater lake in Yunnan Province and the sixth largest one in China. Unfortunately, the lake got polluted. Despite efforts to save the lake, they have been largely unsuccessful. Nevertheless, there are numerous attractions along the lake. Among these are the Yunnan Ethnic Villages, Daguan Park, Baiyukou Park, Haigeng Bank, Kwan-yin Hill, Xishan Forest Park, temples and pagodas. Towns, big or small near the lake provide visitors with an opportunity to experience the customs of the local people. 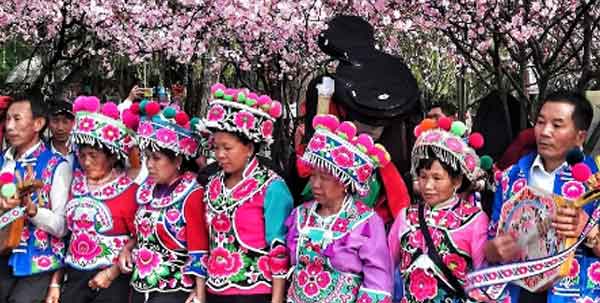 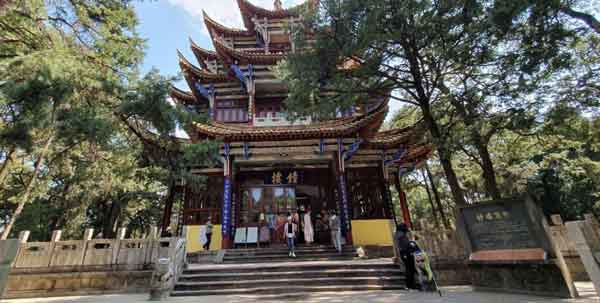 With a history of more than 1,200 years, Yuantong Temple is the grandest and most important Buddhist temple in Yunnan Province. King Yimouxun of the Nanzhao Kingdom built the temple. The restorations from the Qing Dynasty onward has not changed the unique mixed architectural style of the Yuan and Ming Dynasties. After two major restorations and expansions between1465-1487 and the 24th year of Emperor Kangxi rule (1686) the temple took on its present design, with covered corridors, bridges, and grand halls. Unlike all other Buddhist temples, you enter Yuantong Temple from above and descend along a gently sloping garden path. An arch is standing halfway. The complex is built around Yuantong Hall that is surrounded by a large pond. A stone bridge connects the hall and the temple entrance. The pavilion is connected to the rest of the complex by various bridges and walkways.

You will find the largest bronze temple ever built in China just 15 km to the east of Kunming: the Golden Temple on the Mingfeng Hill. The temple was first built in 1602 during the Ming Dynasty (1368–1644), imitating the design of the Taihe Palace in Wudang Mountain in Hubei Province. The temple is shining like gold under the sun. Like most Taoist temples, you have to climb hundreds of winding stone steps and pass three gates that are decorated with well-painted archivolts and carded beams and rafters. The view from the stairs is beautiful.

Kunming flower and bird market are very centrally situated within the area bounded by Dongfeng West Road to the south, Wuyi Road to the west, Renmin West Road to the north and Zhengyi Road to the east. If purchasing cute little puppy dogs, live crickets, birds, live bird food, tortoises and other things creepy, crawly and/or fluffy is your thing then it is your place to be... along with a few flowers and a great many trinkets. The most obvious stalls begin where Wuyi Road meets Dongfeng West Road but other sellers can be found on other streets within the district.

Green Lake Park, is an urban park in Kunming. It was established in the 17th century on the west side of the Wunhua Mountain and is sometimes described as a 'Jade in Kunming'.The lake was originally a water reservoir for the city. Brightly painted pavilions on the islands inside the park, tree-lined walks, flowers.