Lijiang (2400 meters above sea level) has a history dating back more than 800 years. Lijiang Old Town is famous for its orderly system of waterways and bridges.

Sometimes it is called the 'Venice of the East'. Once, it was a confluence for trade along the old tea horse road. It is a Unesco Heritage Site since 1997. The entire old town has been rebuilt and even enlarged, but using strictly authentic traditional methods and materials. All streets are paved with red breccia (sedimentary rock), which is neither muddy in the rainy season nor dusty in the dry season.
The old town of Lijiang differs from other ancient Chinese cities in architecture, history, and culture. The city is famous for its unique Naxi culture. The Naxi originate from Tibetan nomads and they dress in black or deep blue. They have a matriarchal family tradition and their own script that dates back more than 1000 years.
Other smaller minority groups live around Lijiang, including the Lisu, Pumi and Nuosu Yi. The Pumi is more brightly clad than the Naxi people, and the Lisu can only be seen by visiting the more remote districts close to the Salween River. 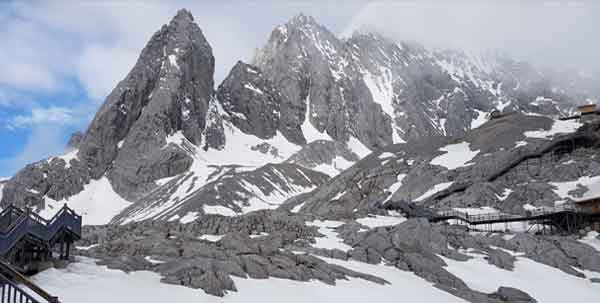 This mountain is actually a massif that forms the far side of the Tiger Leaping Gorge. It stretches a length of 32 km and a width of 14 km. The massif counts 13 peaks, of which the highest is named Shanzidou, 5,596 m. The others have at least an altitude of 4,000 m and are covered by snow all year round.
The view of the massif from the Black Dragon Pool in Lijiang is stated as one of China's finest views. Lijiang Old Town is just about 15 km to the south.

The LashiHai wetlands and the lake are located in the middle of Lijiang County. It became a plateau wetland nature reserve in June 1998. Since then, nature got slowly rehabilitated and turned out to be a paradise for thousands of birds. So far, 57 species have been counted.

The Tiger Leaping Gorge in Yunnan offers one of the finest treks through some of the most naturally beautiful and diverse landscapes China has to offer. The trail is passing through quiet villages, shady forest, and verdant terraced farmland. The snow-covered peaks of Jade Dragon Snow Mountain and Haba Snow Mountain shadow either side of the gorge.

The Tiger Leaping Gorge is part of the Three Parallel Rivers of Yunnan Protected Areas World Heritage Site. The Gorge is about 15 km in length.
Legend says that in order to escape from a hunter, a tiger jumped across the river at the narrowest point (still 25 meters wide), hence the name.

The mighty Yangtze river sweeps through the northern part of Yunnan. In this part of China, it is also called Jinsha Jiang; River of Golden Sands. This river is the longest river in Asia, and the third-longest in the world, behind the Nile in Egypt and the Amazon in Africa. It flows for 6,418 kilometers starting from the glaciers of the Tibetan plateau. The river drains one-fifth of the land area of the People's Republic of China.
The Yangtze River flows through a wide array of ecosystems. The river itself is habitat to several endemic and endangered species, among which are the Chinese alligator, the Yangtze River Dolphin, Chinese Paddlefish, and the Yangtze sturgeon. The Three Gorges Dam on the Yangtze River - by the town of Sandouping - is the largest hydro-electric power station in the world.

The Yangtze can best be seen at the Tiger Leaping Gorge, where it runs through the deep canyon.

Some 70 kilometers from Lijiang, the Yangtze River makes its famous First Bend; a world-famous geological phenomenon. This extraordinary turn creates beautiful views that startle your imagination. The river banks are fertile with deep green vegetation bordered by steep mountains that want to touch the sky.

At its great turn, you will find the village Shigu or Stone Drum. This ancient town is named after a drum-shaped marble plaque. Built during the Jiaqing era (1548-1561) of the Ming Dynasty, the stone drum is a monument commemorating the victory of Lijiang's Naxi ruler over an invading Tibetan army.

The Black Dragon Pool Park is commonly referred to as the Temple of the Dragon King. It was built in 1737 during the Qing Dynasty. It offers a spectacular view over the Jade Dragon Snow Mountain. Besides, the park features several temples and pavilions, such as the Moon Embracing Pavilion and the Dragon God Temple. In the north of the park, you find the famous Five-Phoenix (Wufeng) Pavilion.

Wenfeng Si Monastery - a few kilometers south of town - is one of the Five Famous Temples of Lijiang. These temples were founded under Mu Tian Wang, the 17th-century Naxi king. He was a religious man, instrumental in the growth of the Red Hat Sect of Buddhism in his domain.
Wenfeng Si - also referred to as the Peak of Culture Temple - was built in 1733 at a height of 3,465 m. Wenfeng Si was famous in its time as a meditation center. Above the temple is a hole in the earth, near a sacred spring where monks would stay for over three years to engage in intense meditation.

The other four temples are:
1. Fuguo
2. the Jade Summit Temple (Yufeng Si). This one is famous for its setting in a pine forest. In late February or early March the forest flowers richly
3. the Temple of Universal Benefaction (Puji Si). The temple can be reached by a mountain trail
4. the Zhiyun Si in the nearby town of Lashiba. This temple is now a school.

Baisha is a small village 8 km north of Lijiang. Baisha was the historical capital of the Naxi kingdom. You wouldn't guess that after a glimpse at the houses. Baisha is nowadays more of a sleepy farm village.

Baisha features old temples with interesting frescoes, of which the Baisha Mural is the most famous. It is housed in an original 15th century Ming structure. The frescoes were made between 1385 to 1619 by Chinese Taoists, Tibetan and Naxi Buddhists, and local Dongba shamans. The main colors are black, silver, dark green, gold and red. The pictures depict religious stories, the scenes and figures are largely taken from Tibetan Buddhist iconography and include the wheel of life, judges of the underworld, the damned, titans and gods, Buddha and bodhisattvas.

Other attractions in Lijiang

Another attraction is the water wheel. You can find it between the Red Wall and the Yuhe Square where 'East Street' and the Old Town starts.