Shangri-la is to be the edge of the world for many people. This small town is located in Yunnan on the border with Tibet, Sichuan, and Myanmar. Read more about the highlights Shangri-La.

In Shangri-La modern life hasn't yet heavily influenced the people. Secluded from the outer world, Shangri-La attracts adventure travelers from all over the world. Shangri-La was formerly called Zhongdian, but was renamed in December 2001 as Shangri-La.
Shangri-la appeared in the writing of "Lost Horizon" by James Hilton. Indeed, the reality matches the description in his book.
Read below about the cultural and natural highlights Shangri-La. 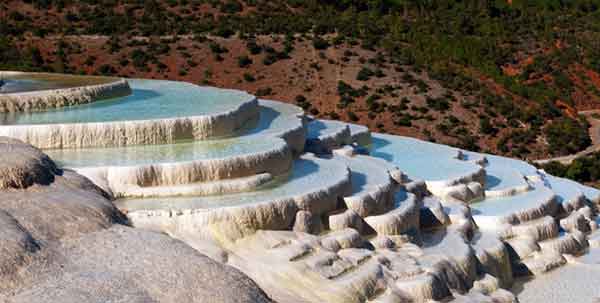 There are many places, especially in the southwest of China, where you can admire the magnificent terraced fields. The White Water Terraces or Baihuitai is a unique site that shines with a natural charm.
How was this extraordinary landscape formed? Well, the spring water descending from the Haba Snow Mountains contains carbonic acid that is heavily loaded with pure calcium carbonate. Over 200,000 to 300,000 years ago, white calcium sediment clung to the side of the mountain to form terraces of white water. Today, this site is the beautiful and unusual display of terraces of white marble.
The White marble terraces attract numerous visitors. One will be fascinated by the picturesque view. Besides, this site is the birthplace of Dongba religion; thus, the Naxi people often meet here to pay tribute to the founder of their culture. 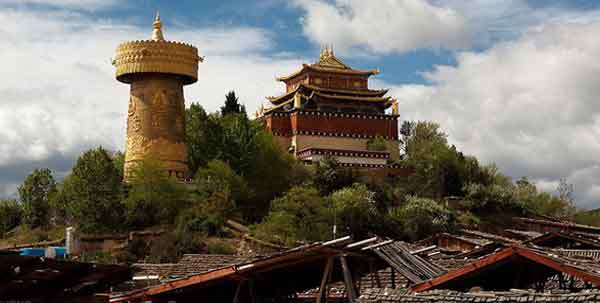 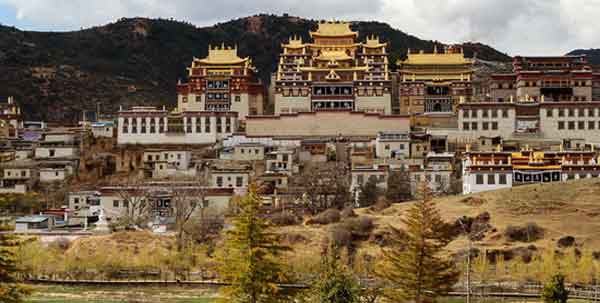 The Songzanlin Si monastery is the largest monastery of Yunnan. Located almost at the gate of Tibet, this monastery contains incomparable treasures and frescoes, which depict the life of the Buddha. Feel the sacred atmosphere.
The frescoes that are painted by renowned lamas show guardian deities, scenes from the Lord Buddha's life and the 'wheel of life' that (held by the demon of impermanence) depicts the six realms of existence: heaven, demigods, humankind, hell, hungry ghosts and animals. The hub in the wheel's center symbolizes ignorance, hatred and greed, the three poisons of life.
Besides, the wheel of life, characteristic of Tibetan Buddhism is presented. The six worlds of reincarnation are depicted: paradise, the demi-God, humanity, hell, hungry ghosts and animals. In the center, the three branches of life govern the laws of reincarnation: ignorance, hatred, and greed.
In addition, Songzanlin contains rare Buddhist books written on palm leaves, as well as eight sculptures covered with gold of the founder of Buddhism, Sakyamuni.

This Tibetan Buddhist monastery is often regarded as the little Potala Palace, considering that the grand in the Tibetan capital, Lhasa. Its architecture is reminiscent much of the palace of the Dalai Lama. The identified windows of black, white and red walls are typical of Tibetan temples. It is the largest Tibetan Buddhist monastery in Yunnan, which is not surprising given that it lies on the border of Tibet. In the Tibetan language, the Songzanlin monastery is named Ganden Sumtseling Gompa.

Although damaged at the time of the Cultural Revolution, this monastery dating back to 1679 was partially rebuilt. It is still inhabited by more than 500 monks of the great sect of the Yellow Hats. It consists of two lamaseries Zhacang and Jikang, and represents a complex of halls. Each room has a particular function.

Dukezong Old Town is a 1300-year-old Tibetan town located in Shangri-La. Dukezong Old Town is a former commercial stop on the Ancient Tea-horse Road and a focal point for Han-Tibetan exchanges. As it is situated at Yunnan's border, one can find typical Tibetan architecture. Everything in this village recalls the simplicity of life.
The old town is a tangle of finely carved wooden houses. Pedestrian lanes lead visitors into remote parts where Tibetans still live in accordance with their traditions. The architecture, local residents and especially women in turbans remind visitors that they are on the border of Tibet.

In James Hilton's novel "Lost Horizon", a village is described as paradise. According to the research, this city would actually be Zhongdian. The Chinese government then decided to change the name of this village in Shangri-La, which means 'Paradise in a dream'.
The old town of Zhongdian - or Shangri-La Old Town - has kept its original charm and traditional architecture as opposed to new buildings that are further away. Paved sometimes with tortuous and steep streets, one may get lost in a maze of these finely carved wooden houses. Here, even the roofs are made of wood and the pillars of the houses are vaguely reminiscent of western mountain cottages.
Every evening, Tibetan women and men of all ages gather in the central square, which comes alive with the sounds of Tibetan music. Traditional dances are performed at the same time. Some women still wear a traditional outfit with fuchsia turbans and long skirts.
Truly one of the highlights Shangri-La.


Would you like to visit Shangri-La. We have several options: