One-third of the province's population belongs to one of the 26 minorities present. This ethnic diversity has led to a varied and complex order of religious beliefs, which co-exist happily. 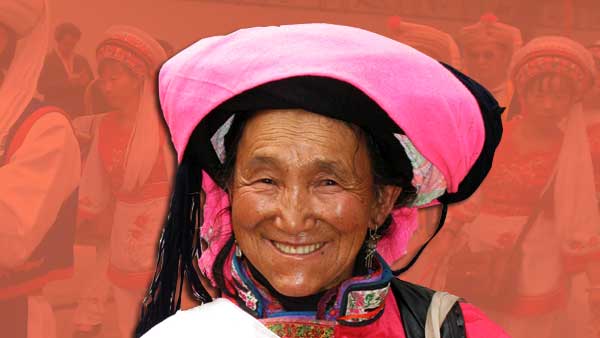 An incredible amount of minorities

In total, you can find 56 ethnic minorities. Only in Yunnan, you encounter 26 officially recognized ethnic minorities, among which are the Bai, Dai, Yi, Naxi, Hui, Mosuo, Hani, Miao, Pumi, Lahu, Tibetans, and Lisu. Just to mention a few.
Different ethnic minorities have different customs, etiquettes, costumes, religious beliefs and even languages. Their colorful lifestyle, dancing, and singing are a feast to your eyes and ears.
If you like to read more about the minorities, please check this link.

These 26 minorities form one-third of the total population of the province. Besides, the province is home to around 30 million Han Chinese. The Han constitute the majority of the people in China.

Yunnan is one of the most ethnically diverse provinces in Asia. The Bai and Dai are among the few registered ethnic minority groups to have populations over the one million mark. Yi, Naxi and Hani ethnic groups have also surpassed this mark. The Miao, Lisu, Hui, Lahu, Wa, Yao, Jingpo and Tibetan minorities all have populations exceeding 100,000, while the Bulang, Buyi, Pumi, A'chang, Nu, Jino, De'ang, and Mongolian groups each exceed 10,000. The Shui, Manchu, and Dulong have more than 4,000 members each.
The Southwest had been invaded many times in the course of the Chinese emperors’ attempts to unify the empire. Through these invasions, culturally uniform Han Chinese standards and values were introduced to ethnic minorities’ civilizations. On the other hand, inter-ethnic and cross-cultural exchanges were common along the trade routes in the mountainous regions of Yunnan Province.

Ethnic minority people’s identities in China have been difficult to define. Out of over 450 ethnic minorities’ claims for official status as an ethnic minority, 260 applications came from Yunnan Province during the nationwide ethnologic identification project conducted in the late fifties by the Central Government. The Central Government finally classified 26 ethnic minority groups as more or less 'developed'.
Over the past 20 years, the government has recognized the importance of having a multi-ethnic nation, known as duominzu guojia. Writing systems are being developed for all minority languages in China, and elementary school students in some minority areas have been offered a choice of either Chinese or their minority language as the medium of instruction.
The lineage of the tribal way of life of the indigenous peoples persisted uninfluenced by modernity until the mid-20th century. Tribal traditions, such as Yi slave-holding and Wa headhunting, have since been abolished. After the Cultural Revolution (1966–76), when many minority culture and religious practices were suppressed, Yunnan has come to celebrate its cultural diversity and subsequently, many local customs and festivals have flourished.

Ethnic diversity in Yunnan has led to a varied and complex order of religious beliefs, which co-exist happily. The four distinct religions are Buddhism, Taoism, Islam, and Christianity. However, one group may believe in several religions simultaneously, whilst other groups may share one common belief. Taoism, introduced in the 7th century, is principally a Han belief, while Islam came to Yunnan around 1253 with the establishment of the Yuan Dynasty and the arrival of outside officials to replace local authorities. An English missionary introduced Christianity in 1877.

Despite its agricultural blessings and vast mineral resources, Yunnan is one of China's relatively undeveloped provinces. The province faces great challenges in social issues such as environmental protection, poverty elimination, illegal migration, drug trafficking, and HIV/AIDS.

The poverty alleviation plan includes five large projects aimed at improving infrastructure facilities. They involve planned attempts at soil improvement, water conservation, electric power, roads, and 'green belt' building. Upon the completion of the projects, the province hopes this will alleviate the shortages of grain, water, electric power, and roads. The Lancang River - upper reaches of Mekong River - is the waterway to southeast Asia. And, in recent years land transportation has been improved to strengthen economic and trade co-operation among countries in the Greater Mekong Subregion.

Yunnan's abundance in resources determines that the province's pillar industries are: agriculture, tobacco, mining, hydro-electric power, and tourism. The electricity industry is another important economic pillar of Yunnan, which plays a key role in the "West-East Electricity Transmission Project". The electricity produced in Yunnan is mainly transported to Guangdong Province.

The main manufacturing industries are iron and steel production and copper-smelting, commercial vehicles, chemicals, fertilizers, textiles, and optical instruments. Yunnan has trade contacts with more than seventy countries and regions in the world. Yunnan mainly exports tobacco, machinery and electrical equipment, chemical and agricultural products, and non-ferrous metals. In 2008, its total two-way trade (imports and exports) reached US$ 9.6 billion. Yunnan's unemployment rate at the end of 2008 was 4.21%. Yunnan's nominal GDP in 2009 was 616.8 billion yuan (US$ 90.04 billion), an annual growth rate of 11%. It's per capita GDP was 13,494 yuan (US$1,975).

The Kingdom of Zinc

Yunnan is one of the major production bases of copper, lead, zinc, tin, and aluminum in China. Gejiu city is well known as "the Kingdom of Zinc" with the reserves ranked first in the country. The Yunxi brand refined tin is one of the main products in Gejiu, which is registered on the London Metal Exchange (LME). Besides, reserves of germanium, indium, zirconium, platinum, rock salt, sylvite, nickel, phosphate, mirabilite, arsenic, and blue asbestos are also high. Significant copper deposits are found at Dongchuan, iron ore at Wuding, and coal at Xuanwei and Kaiyuan. Economic policy to locate new industry in interior areas with substantial mineral wealth, led to major industrial development in Yunnan, especially in the Kunming area. 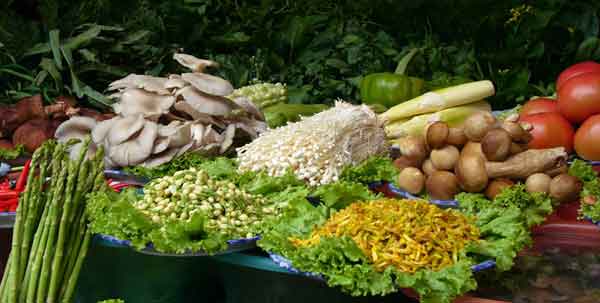 Yunnan maintains a strong agricultural focus, although just about 5 percent is under cultivation. Agriculture is restricted to the few upland plains, open valleys, and terraced hillsides. Level land for agriculture is extremely scarce. Agriculture contributes 15% to the GDP.

Rice is the main crop. Corn, barley, wheat, rapeseed, sweet potatoes, soybeans (as a food crop), tea, sugarcane, tobacco, and cotton are also grown. Yunnan is currently China's most important producer of Arabica coffee. Yunnan is the birthplace of tea and still, ancient tea trees can be found in Yunnan of which tea leaves are processed. Furthermore, fruit and vegetable are grown, especially low value-added commodities such as fresh and dried vegetables and fresh apples. On the steep slopes in the west livestock is raised and timber, a valuable resource, is cut.

Yunnan is one of the regions in the world with the most abundant resources of wild edible mushrooms. In China, there are 938 kinds of edible mushrooms, and over 800 varieties can be found in Yunnan. The so-called 'pine mushroom' is the main product in Yunnan.

Last but not least, a growing sector - and heavily supported by the local government - is the horticulture. The flower industry in Yunnan province started to develop towards the end of the 1980s. Yunnan province accounts for 50% of China's total cut flower production. Around 4,000 hectares are reserved for cut flowers. Apart from sales on the domestic market, Yunnan also exports to a number of foreign countries and regions such as Japan, Korea, Hong Kong, Thailand, and Singapore. 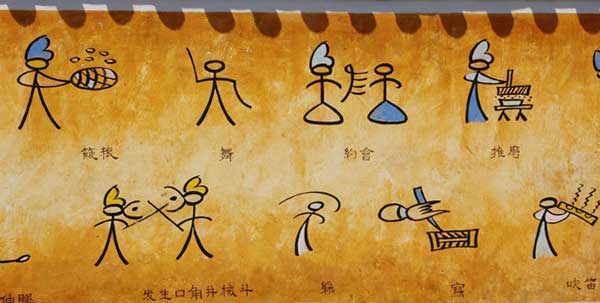 Most dialects belong to the southwestern subdivision of the Mandarin group. They are very similar to the dialects of neighboring Sichuan and Guizhou provinces. In addition to the local dialects, most people also speak Standard Chinese ('Mandarin'), which is used in the media, by the government, and as the language of instruction in education.
Languages spoken in Yunnan include Tibeto-Burman languages such as Bai, Yi, Tibetan, Hani, Jingpo, Lisu, Lahu, Naxi; Tai languages like Zhuang, Bouyei, Dong, Shui, Tai Lü, and Tai Nüa or northern Lao dialect; as well as Hmong–Mien languages. The Naxi, in particular, use the Dongba script. This is the only pictographic writing system in use in the world today. The Dongba script was mainly used to provide the Dongba priests with instructions on how to carry out their rituals. Nowadays, the Dongba script features more as a tourist attraction.