Chinese like to travel in and around Chinese national holidays, of which there are four. Keep in mind that during these periods prices of accommodation and transportation can be 30 to 50% higher than normal. Be aware that in by tourist favourite places, including restaurants and bars, higher prices might be calculated. 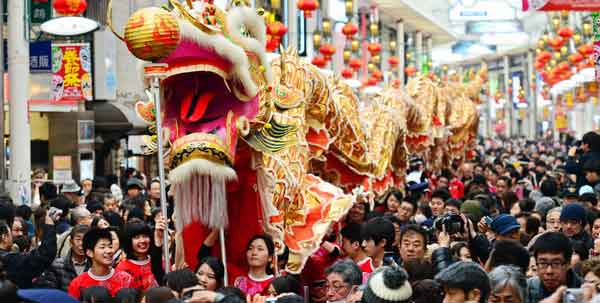 Chinese Lunar New Year takes place between late January and late February, depending on the moon calendar. It's the most important traditional festival in China, and comparable to Christmas in the West. Chinese have seven days for this event. During the Spring Festival, firecrackers are set off by children, families get reunited, much delicious food are served, and people buy new clothes.

May 1st is Labour Day in China. 3 day holidays are taken around this period, 28th of April till 15th of May.

Chinese school holidays are from the first of July till the end of August.

The National Holiday, a period of 10 days in which approximately the whole country comes to a standstill, is a period in which all Chinese travel. It is all about the National Day on October 1st. 7 day Holidays are taken from the 28th of September will around the 15th of October. 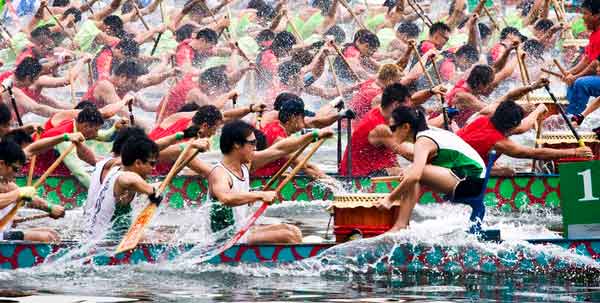 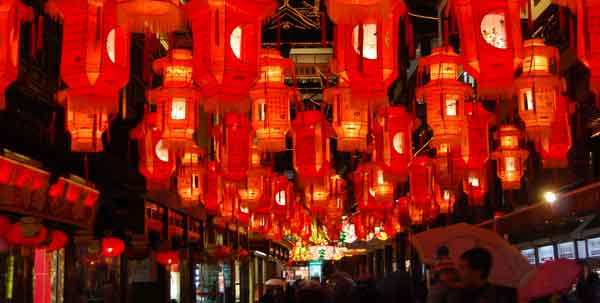 Almost impossible to mention them all, but we give it a try.... herewith quite a lot of traditional festivals.
To get a complete list you can take a look at Yunnan Festivals Calendar.

The Lantern Festival falls on the 5th of the first lunar month (according to the Gregorian calendar on February 26 in 2021 and February 15 in 2022). On this occasion, the door of every home is decorated with lanterns. Full lengths of streets are lighted by strings of lanterns hanging along both sides. People usually cook and eat sweet dumplings.

The Qingming Festival is held in early spring. It has been one of the most important festivals in China for thousands of years. During this occasion, people burn incense and offer sacrifices at the graves of their ancestors. Chinese also mourn the dead.

The Dragon Boat Festival is already being held for centuries throughout China. It is celebrated on the 5th of the fifth lunar month. This day is in memory of the patriotic poet Quyuan, who lived during the Period of War States. That is about 2300 years ago. Especially on this day, the herbs calamus and felon are hung on the doors to protect the house from devils. Everywhere Dragon Boat races will be organized and zhongzi - glutinous rice wrapped in red leaves - is being served.

March Fair or Kwan-yin Fair (San Yue Jie) is both a festival and a country fair. For the Bai people the happiest day of the year. At the country fair, goats, cattle and horses bought and sold. In addition, horse-racing, performances of folk dance and folk songs are being sung. The happening lasts one week, starting at the 15th day of the 3rd lunar month.

Around the time of China's Spring Festival, the Hani people celebrate the Yangmatu Festival in honour of their heroes. The Hani pray for their union and for a fruitful harvest. Sacrificial ceremonies are organised in the centre of the village and a grand banquet in the street - also called Changlong, meaning Long Dragon - is part of the festivity. The villagers are more than happy to welcome visitors. The festival usually lasts three days.

This is a traditional festival of the Jingpo people. On this occasion, thousand of Jingpo people take part in various activities. They sing and dance merrily with gongs and drums while praying to God for blessings and a rich harvest. It's held in the middle of March according to Local Godthe lunar calendar.

Most of the Bai people are Buddhist, but also have local Gods. Every village has several temples, dedicated to one of their local Gods such as 'money god', 'medicine god', 'mercy god', 'fishermen god', etc. Even more interesting, every god has its own birthday that is celebrated with a major festival on which people dance, sing and bring offers.

July Fair is an important festival and carnival to the Naxi people. Livestock, horses, cattle, bulls, mules, and donkeys are exchanged or bought and sold. Naxi sing and dance right from the heart and by doing so express a lot of happiness. The fair lasts one to two weeks.

Every year on the 15th of the eight lunar month the Mid-Autumn Festival keeps China busy. During that particular night, it is said that the moon is brighter and fuller than any other night. People get together in their courtyards, on river banks or in parks to offer feasts to the moon, eat 'moon cakes' and many different kinds of fruits. The Mid-Autumn Festival is an occasion for families to get together.

From the 24th to the 26th of the sixth lunar month the Torch Festival (Huo Ba Jie) is the happening celebrated by Yi and Bai people. The main activities are wrestling, bull-fighting, archery contests and horse-racing. During the night, people light torches and move in a procession towards the outskirts of the village, where they will sing and dance around a huge fire.

In Xishuangbanna, in the south of Yunnan, the Water Sprinkle Festival is an important festivity. This is the day when the Dai-minority celebrates New Year. It is the Dai people's ritual of bestowing blessings on others. The more water is splashed, the greater the blessings and happiness for the one getting wet.
As the title suggests, people get solemnly together to sprinkle water. There are two options to sprinkle and to get sprinkled. In the first gentle option, the elderly get sprinkled. When splashed, the recipient is not allowed to walk away. After dipping an olive branch into clear water and muttering a wish, one spills a few drops onto the head of the elderly. The second less gentle option is for anybody else. Buckets of water are thrown into somebody's face and entire body.